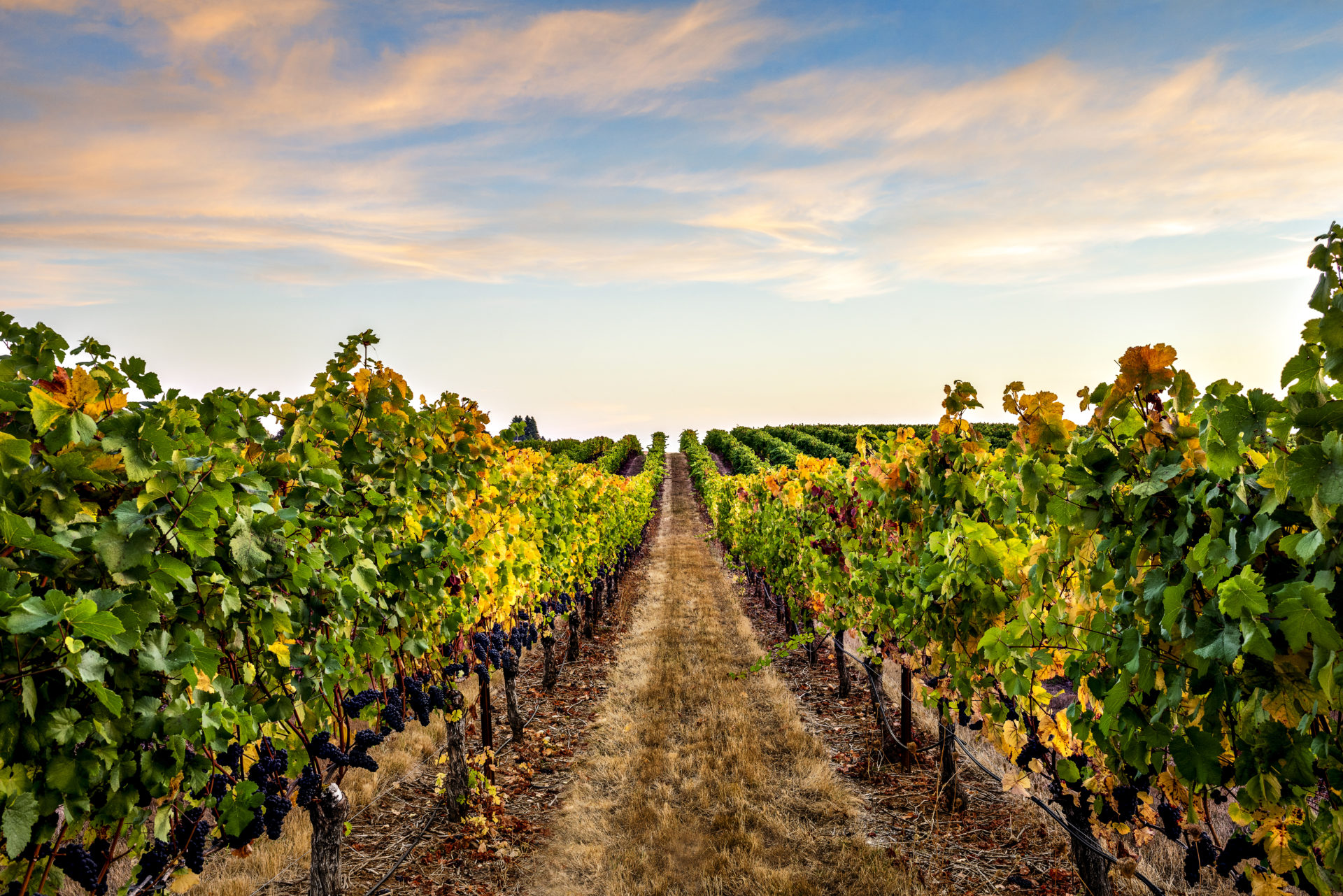 When Benton-Lane founders Steve and Carol saw the vineyard for the first time, they thought they had won the lottery–it was perfect, especially for Pinot Noir.

The vineyard was a historic, beautiful sheep ranch called Sunnymount. They learned that this name came about over 100 years ago due to Prairie Peak to the west that protected the ranch from winter storms. This mountain carves the rain clouds, sending them north and south while the ranch bathes in sun. Exposure to sun produces wine with full flavor.

The Benton-Lane vineyard is nestled in the middle of a peninsula-like outcropping of the Coastal Mountain Range on a gentle southeast slope. This aspect allows the vines to receive both the benefit of early morning sun and full exposure throughout the day. The vineyard also rests high enough so the cold night air drains down to the valley floor, which helps the vines escape harmful frosts. The vines are above the valley fog-line yet low enough to escape the strong winds at the top, both of which would adversely affect grape quality. The volcanic soils are brick red due to their high iron content and are deep and well drained, ensuring active and healthy root systems.

Benton-Lane has always viewed soil as a living entity in need of replenishment. This is one of the main tenets of the biodynamic method. Benton-Lane also embraces the importance of building rich, fertile humus. This is done by disking green-growing cover into the soil and by composting a proprietary compost blend made on site.

Benton-Lane embraces the concept of keeping the vineyard as natural as possible. Mineral oil is used as a mildecide. Road dust is controlled with a natural retardant made from tree bark to prevent mite problems. Hawk perches are placed to reduce rodent populations. However, the organic method was developed at a time when available pesticides were harsh. Since then, manufacturers have developed synthetics that are much more earth-friendly than some organic counterparts. While embracing some organic practices, Benton-Lane uses synthetics and soft fungicides to give the vineyard and workers the safest products available.

Care of the Land

Surrounding the 142-acre vineyard are 175 acres of native vegetation that serves as a habitat for wildlife, insects and native plants. Benton-Lane allows for large areas of native habitat for ecological compensation areas prescribed by the LIVE program. Ecological compensation is a way to protect areas where sources of drinking water are located. Erosion is also controlled by growing cover crops and building rock drainage ways. Benton-Lane believes in the requirements of integrated pest management to ensure that any crop application reaches the target area only and in the correct amount at the right time.

Benton-Lane uses compost to rejuvenate its soils. The compost is a proprietary blend of grape skins, seeds and stems, peppermint straw, rock dust and manure. The compost is cooked until these components form dark powdery humus. The compost is then incorporated into the soil to replace the nutrients that the vines may have depleted. Cover crop of Austrian winter peas, oats, fava beans, annual rye and crimson clover is used to reduce erosion, build biomass and to provide rich, fertile soil humus. Benton-Lane also uses sheep to mow the grasses and to fertilize the land, reducing soil compaction and the amount of diesel burned.

Benton-Lane practices extensive canopy management. The vineyard team shoots thin to open up the canopy; they remove crop and leaves to open the fruit zone to light and air. This reduces the need for pesticides and produces more flavorful fruit. These practices are expensive and must be done by hand so they are normally eliminated by vineyards that don’t make wine but sell their fruit. This is why Benton-Lane can produce higher quality wines if they grow, rather than purchase their grapes.

Benton-Lane has an employee vegetable garden that produces food for the family. The family cooks in a wood-burning oven to save electricity and they value the importance of recycling. They have planted numerous trees to mark property lines instead of erecting fencing. They provide their workers with safe working conditions, all safety equipment, training, restroom facilities, handwashing, bottled water stations and a heated break room. They have also installed solar panels on the entire south facing winery roofs.